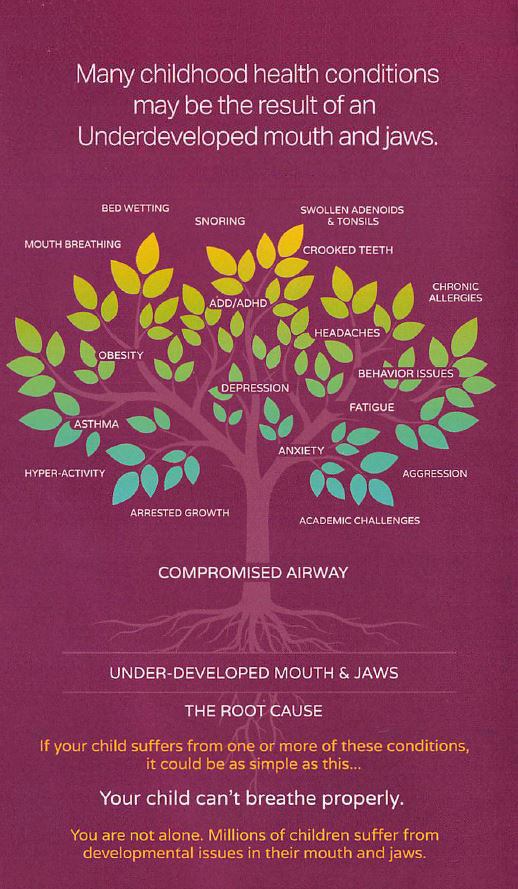 DO YOU OR YOUR CHILDREN SUFFER FROM ANY OF THESE?

Using a system of noninvasive treatments, our dentist, Dr. Sandford, can treat the root cause of all of the above ailments while also straightening the teeth for a beautiful smile that lasts for a lifetime. Your child can be healthy, confident and well-behaved as a result of these sleep-disordered breathing treatments.

The Association Between Sleep-Disordered Breathing and Enuresis in Children

The Laryngoscope; First published: 29 March 2012 Anita Jeyakumar MD, FACS; Syed I. Rahman BA; Eric S. Armbrecht PhD; Ron Mitchell MD Objectives/Hypothesis: To evaluate the prevalence of nocturnal enuresis in children diagnosed with sleep disordered breathing (SDB) and the effect of adenotonsillectomy (T&A) on nocturnal enuresis.Results: A total of 14 studies were reviewed. A total of 3,550 children had SDB, of which one‐third (n = 1,113) had a diagnosis of enuresis. Age range was 18 months to 19 years.
Conclusions: SDB in children is associated with nocturnal enuresis. T&A is associated with a significant improvement in enuresis in children with SDB. There is a need for randomized controlled trials to look at the role of T&A in children with SDB and enuresis.

With our Healthy Start program, we hope to treat your child’s sleep-disordered breathing in conjunction with other symptoms and give back some of the carefree happiness that childhood should have. If your child exhibits any of the above symptoms, ask our dental team about the Healthy Start program today. Give our dental practice in Austin, Texas, a call at 512-263-8284 for more information.

Accessibility by WAH
Call Us Text Us